Writing my first full science proposal in a new tenure-track position was challenging but, honestly, most sections flowed smoothly from my fingertips. The motivation, background, research approach, hypotheses, methods, and even project and data management plans fit snuggly together beneath the overarching question: Will forests interact differently with rainfall along a natural-to-urban continuum? Then, confidently, I wrote “Broader Impacts” in bold, sipped my single-origin third-wave coffee, and stared blankly at the blinking text cursor. Every other blink interrupted my stream-of-thought until, after mere minutes, the cursor had elevated itself from nuisance to arch-nemesis. It became clear that each blink was a taunt as it shed its disguising vowel for a more rancorous one, becoming the villainous “Curser.” Unluckily, I knew this villain all too well. I also knew that I had to act fast, before the Curser’s mocking winks dissolved my thoughts to mush! With astonishing rapidity, my fingers fluttered out several sentences, forcing the Curser to retreat down the page. There it sat, one line below my newest paragraph, derisively staring at this anemic assembly of platitudinous promises. Like a bot trained by reading innumerable “Broader Impacts” sections, I had spewed out some vanilla text pudding that blandly promised to “present and publish findings,” “integrate work into my courses,” “extend current scientific theory,” and so on …list abbreviated as to not bore the reader any more than was necessary. I locked an unflinchingly open stare with the Curser’s unflinchingly blinking slash. It was clear: The battle for unique broader impacts had begun! 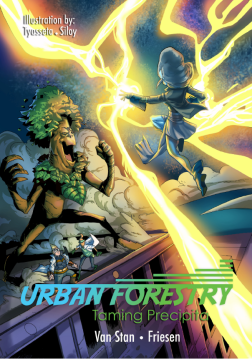 Long story short, I won the battle that day by invoking the outreach power of comics! Once over this hurtle, I easily vanquished the Curser by thrusting it outside of my proposal’s 15-page limit. Broader impacts are clearly an important aspect of water science. As scientific understanding of the water cycle deepens, the knowledge gap between hydrologists and the public may widen. Widening this gap is dangerous for effective water resource management, as the public’s knowledge is key to their engagement in, and support of, conservation efforts (Dean et al., 2016). We, hydrologists, may wonder why the public isn’t keeping up. After all, captivating stories that relate major advances in water science and technology are constantly being published in top-tier journals with international exposure! We even enthusiastically share these scientific stories on social media. Our nuanced technical tales may enthrall the scientific reader with its detailed and repeatable plotline that climaxes with highly contextualized results. Unfortunately, the same scientifically enthralling story may be incomprehensible to the public, or potentially worse, be misunderstood. In this blog post, I describe my journey to discovering research comics and the challenges of integrating this sequential artform into my broader impact activities. Then, I share the story behind a recent science comic, “Urban Forestry – Taming Precipita,” that was developed as an outreach element from a US-NSF Hydrologic Sciences project (1518726).

Conversations with a sequential artist 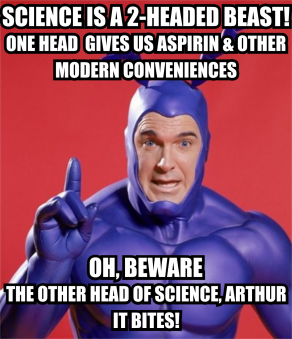 My impression is that scientists rarely feel the “biting head” of science as keenly as the public, or the Tick (Figure 2). Sure, hydrologists feel the biting head of reviewers occasionally, but the watery mouth of hydrology can seem captivating and, perhaps, toothless to those who study it. Although the Tick was talking literally in the quote given in Figure 2, my conversations with non-hydrologists over the years exposed a “head of science” that caused many to recoil as if bitten – the language. The bite of professional hydrologic terminology was a barrier to be overcome during the initial stages of my collaboration with artists. When I moved to Savannah, Georgia (USA) in 2012, it was inevitable that I would converse with a sequential, or “comic,” artist. This is because a private art college, the Savannah College of Art & Design (SCAD), is intimately integrated throughout the Savannah downtown. At a coffee shop centrally located within the city and SCAD campus—shout out to my muse, Foxy Loxy!–I began conversations about converting research stories to comics with an art student, Tyas Seta, who was studying abroad on a Fulbright Fellowship. These conversations began with each of us speaking in entirely different languages, as may be apparent in this example exchange:

Seta, “What should the beech tree character do in this panel?”
Me, “Oooo, let’s have him leach phenolic compounds into throughfall to suppress his understory!”
Seta, “…”
Me, mistaking the silence of confusion for tongue-crippling levels of excitement, “Wait! Should we add a panel on the metabolic pathways for allelochemical synthesis in plants?”
Seta, “—Well, but, let’s talk a little more about—”
Me, “—how to represent the allelochemical? Exactly! Maybe the skeletal formula for Catechin, with a face drawn into one of the benzene rings??”
Seta, after a pause, “What’s throughfall?”

Seta, a non-native English speaker, patiently re-acquainted me with my native language as I endeavored to translate my scientific jargon to answer his questions. During these conversations, there were many communication successes, but there were enough communication break-downs that I often thought of the Tick’s warning, “Oh, beware the other head of science” (Figure 2).

Translating the language of hydrologic research

“It is a lovely language, but it takes a very long time saying anything in it, because we do not say anything in it, unless it is worth taking a long time to say, and to listen to.”
-Treebeard, Lord of the Rings by J.R.R. Tolkien

Our hydrologic lingo is key to the clear conveyance of results, how we got them, and where they fit into current scientific theory. Crafting the clearest manuscript “takes a very long time” for most of us, maybe even as long as it takes for Treebeard to deliver a persuasive argument in Old Entish! I’ve found that translating a publication into a publicly consumable comic format takes at least as long as it took to craft the scientific story in the first place. Not only must our “hydrologese” be translated conversationally to effectively discuss and develop the comic concept, but it must be graphically converted. The exaggerated idiom that “a picture is worth 1,000 words” is actually not far off the mark when graphically converting our detail-rich hydrologese. Graphic development includes a detailed storyboard of 5-10 individual graphic panels per page, along with panel arrangement. All the while, one must keep in mind that each panel contains text boxes to ensure important graphical features are not obstructed. Each panel involves a concept generated by the hydrologist (Figure 3, left), that is roughly sketched into a “thumbnail” by the comic artist (Figure 3, center), and finalized after scientific review (Figure 3, right).

Of course, driving the action between these panels are characters that represent crucial elements of the research. In my experience, when hydrologists properly translate hydrologese to the comic artist, character development comes more effortlessly than all other components. One of my earliest projects with Seta involved designing Ent-like characters of different trees, depending on their ecohydrological processes. When discussing in plain English what happens to rainfall that drains through European beech canopies, Seta instantly conceived a villainous character design. Here’s a summary of a few example hydrologic findings and how my buddy placed them into a character context. 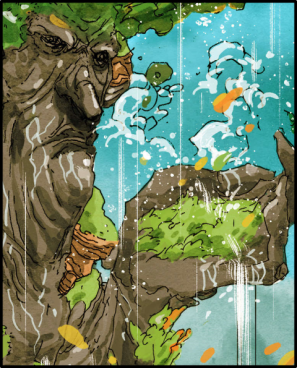 Figure 4: Just look at this villain…

An example: Precipita, the water witch of Leipzig Germany

“Since the beginning of human settlement, people have observed water in its many forms, recording the ways that water supports and subverts life, like a cunning and capricious witch.”
–Urban Forestry – Taming Precipita, Van Stan & Friesen

We (Jan Friesen, Tyas Seta, Siloy, and I) chose to do our latest research comic on the final publication from the aforecited US-NSF project: a book chapter synthesizing research at the intersection of urban forestry and stormwater management (Van Stan et al., 2019). Since the chapter contained recommendations regarding integrated urban forest and stormwater management, we thought it would be fun to develop a story about an example city implementing these recommendations and the hydrological processes involved. We reached out to the Deputy Environmental Mayor of Leipzig (Germany), Heiko Rosenthal, to use his name and likeness, and after attaining permission, we had our setting! To represent natural hydrometeorological processes and the natural landscape, a waterwitch and ent-like creature were developed, respectively (Figure 5, right). Ecohydrologist characters were needed to explain processes and terminology (Figure 5, left). Naming the tree was easy: Linden is the common urban tree species. For the waterwitch, we threw all types of names out there, but one was a clear winner: what better name for a waterwitch who can cast hydrometeorological spells than “Precipita?” With the characters in place, a storyline came together organically: Deputy Mayor Rosenthal calls upon friends of the City of Leipzig to help him address the current and future challenges associated with stormwater management. If you want to know how they do it and the related scientific processes… well, then you’ll have to read the comic! 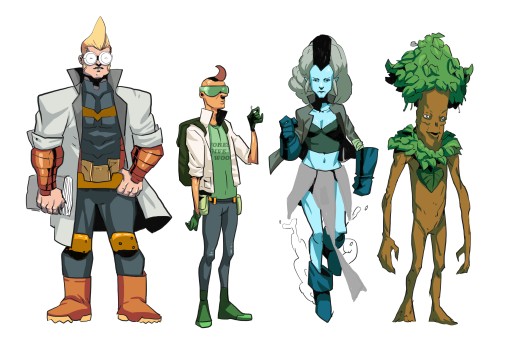 About the authors
John Van Stan (@Prof_Van_Stan) is an ecohydrologist at Georgia Southern University who, in his spare time, creates free audiobooks of public domain literature for librivox (https://librivox.org/reader/9017). The comic discussed in this blog was co-authored with Jan Friesen, an ecohydrologist in the Department Catchment Hydrology of the Helmholtz-Zentrum für Umweltforschung (@UFZ_de). Correspondence to John Van Stan (jvanstan@georgiasouthern.edu).