A –Streams of Thought – post by Nilay Dogulu and Ina Pohle.

Summer is a time for scientists to advance their knowledge, tune their skills and forge ahead on research projects. The leisure of summer also provides a chance to network with colleagues and perhaps enjoy a bit of vacation away from home. Graduate summer schools, offered usually by academic universities, research centers or NGOs, are a week or several week-long-intensive training and education programs on a particular topic. Graduate summer schools – especially those intended for an international audience, promote an international collaborative education and research environment that benefits all who attend.

What are the benefits (of participating)?
There are various academic, career and social benefits of attending a graduate summer school. The intensive curriculum of graduate summer schools allows participants to expand their understanding of a particular subject. Perhaps you already have some basic knowledge but you want to deepen your background. Or, you are new to a subject and want to get the ball rolling in the right direction. Either way, the academic enrichment provided by the graduate summer school is invaluable and can positively distinguish you from your peers.

Hydrology related graduate summer schools
Graduate summer schools focused on hydrology topics have a rich history. For example, “Summer school on remote sensing in meteorology, oceanography and hydrology” (organized by University of Dundee, Scotland in the fall of 1980, see the announcement in Fig. 1), is one of the oldest graduate summer schools. The 2000s saw a substantial increase in availability of hydrology related graduate summer schools. Since its establishment in 2005, the Dutch scientific hydrology centre “The Boussinesq Center for Hydrology” has been organizing several summer schools on different topics (e.g., transport in porous media, experimental hydrology, ecohydrology). Organized jointly by the University of Aberdeen and the Northern Rivers Institute (Aberdeen, Scotland) for the first time in 2010, the Aberdeen Catchment Science Summer School is now a tradition offering a hands-on catchment science curriculum, focusing on northern catchments, runoff processes and combined hydrometric, isotope/chemical tracer and modeling techniques in catchment hydrology. Since 2007, the Ruhr Universität Bochum yearly organizes the International German Summer School on Hydrology around diverse palette of themes. The Luxembourg Institute of Science and Technology offers a summer school on model building, inference and hypothesis testing in conceptual hydrological modeling every spring since 2012. Another traditional summer school is on geostatistics: GEOSTAT is regularly held since 2007, however, every year at a different location around Europe. A summer school focusing on environmental systems analysis (organized by the Swiss Federal Institute of Aquatic Science and Technology, Eawag) is also available since 2009. (You can find a selection of recently organized graduate summer schools on various hydrology related subjects at the bottom of this post) 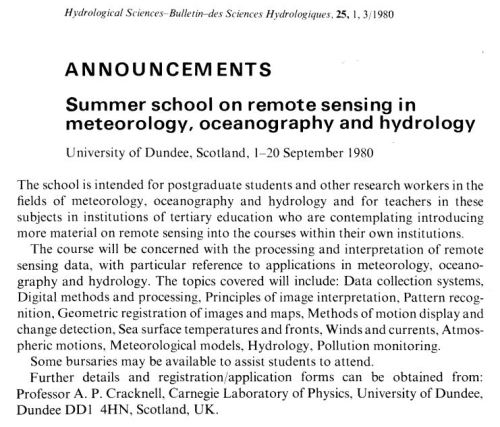 Fig. 1. The announcement of a summer school in Hydrological Sciences Bulletin.

The role of graduate summer schools in hydrology education
Hydrology education has been discussed in detail in various publications (e.g., Nash et al., 1990; Kovar and Gilbrich, 1995; Wagener et al., 2007; Seibert et al., 2013; Ruddell and Wagener, 2015). Although no clear direct emphasis on the potential role (and benefits) of graduate summer schools in hydrology education exists in the literature, there have been a number of associated efforts, however, with more focus on evaluating learning and teaching approaches. For example, Thompson et al. (2012) highlights the importance of student-centered learning and teaching based on case studies of the Hydrological Synthesis Summer Schools – a 6-weeks summer school (held in Vancouver, British Columbia in 2009 and 2010) where students were asked to develop hypotheses and research plans for topics related to catchment hydrology. The experience with the Hydrological Synthesis Summer Schools showed that students had the chance to strengthen their confidence, critical thinking and teamwork skills, although they were not able to develop a robust understanding of the theory behind their research – a typical outcome of “discovery learning” based teaching. Lyon et al. (2013), on the other hand, emphasized the importance of adopting active learning environments (compared to traditional lecture-based environments) while reflecting on the summer school “Ecohydrology: A Mediterranean perspective”. This three-week course uses classroom exercises of two weeks complemented by one week of fieldwork. Both the classroom and field components of the curriculum are based on collaborative learning (i.e., student-student collaboration).

In conclusion, a graduate summer school which adopts student-centered learning and teaching in active learning environments is a useful extension of the standard hydrology education where students can greatly benefit from the intellectual cross-pollination while enhancing their non-academic skills such as problem solving, teamwork, and communication.

PUB Summer School 2015 – a first-hand report
Limited data availability is a central challenge for researchers and practitioners wishing to model the physical hydrology of a watershed. Much of the world’s watersheds are ungauged, meaning that there is a complete absence of on-the-ground hydrologic observations to constrain hydrologic modeling efforts. To get familiar with strategies used to address the challenges in ungauged basins, 38 graduate students, post-doc-researchers and practitioners from 13 countries attended the PUB 2015 – Summer School on Runoff Prediction in Ungauged Basins organized by the Centre for Water Resource Systems of the Vienna University of Technology between July 6-10, 2015 (Fig. 2). 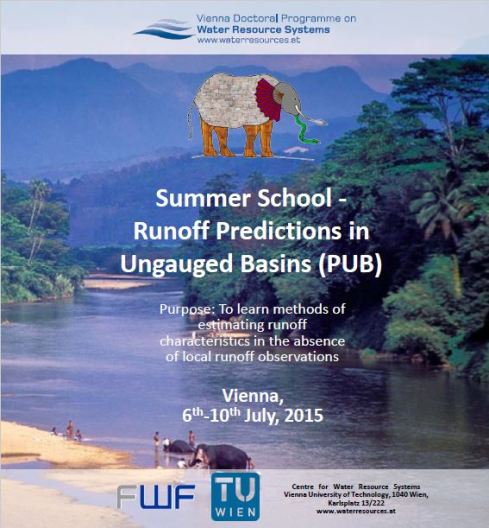 Fig. 2. The flyer of the PUB 2015 – Summer School on Runoff Prediction in Ungauged Basins.

The summer school was inspired by the IAHS Scientific Decade (2003-2012): Predictions in Ungauged Basins (Sivapalan, 2003; Hrachowitz et al., 2013; Blöschl et al., 2013). The two fundamental research objectives of the Predictions in Ungauged Basins (PUB) initiative were: (i) to improve the ability of existing hydrological models to predict in ungauged basins with reduced uncertainty, and (ii) to develop new and innovative models representing the space–time variability of hydrological processes, and thereby improve the confidence in predictions in ungauged catchments (Hrachowitz et al., 2013). The main findings of the PUB initiative are comprehended in the book Runoff Prediction in Ungauged Basins: Synthesis across Processes, Places and Scales (Blöschl et al., 2013). The book is devoted to estimation of runoff characteristics at ungauged locations and structured around six different runoff signatures (i.e., annual runoff, seasonal runoff, flow duration curves, low flows and runoff hydrographs).

The summer school followed the structure of the PUB book. After an introductory part on “data and flow paths” and “R for PUB” on the first day there were two runoff signatures studied each day, i.e., half the day (consisting of two blocks) allocated for each signature. In the first block, a lecture about theory was given and in the second, we applied what we learned in a hands-on exercise (usually with R). We learned about estimating annual runoff and what information may be gleaned from the Budyko Curve. We also learned how PUB methods are used to estimate various catchment runoff signatures. Additionally, the class exercises highlighted the importance of linkages between different catchment runoff characteristics, for example how low flow behavior of a catchment can provide hints about its response to precipitation events.

The final day consisted of a synopsis of the entire course through a group work. Each group was assigned one runoff signature (annual runoff, flow duration curves, low flows, floods or hydrographs) and performed the six main steps of the iterative learning framework for predicting runoff in ungauged basins (Fig. 3). These six steps involved: (i) reading the landscape (to the possible extent that web search and Google maps enable), (ii) analyzing the assigned runoff signature as well as seasonality in the region of interest, (iii) identifying process similarity and grouping (following the procedures discussed during the week), (iv) setting up a model and estimating the (assigned) runoff signature in one (or more) ungauged basins in the region of interest, (v) hydrological interpretation, (vi) uncertainty analysis (e.g., by cross-validation). This challenge was accepted! – Members of each group were quite enthusiastic and worked really hard to get these tasks done in 1.5 hour. Since there were two groups per signature the groups with the same signature joined together to integrate their results and presented their work in a 15 minute presentation. Overall, this group work helped us to combine individual concepts and skills we acquired during the week while giving the opportunity to practice and improve our teamwork abilities as well as efficient working and time management skills. 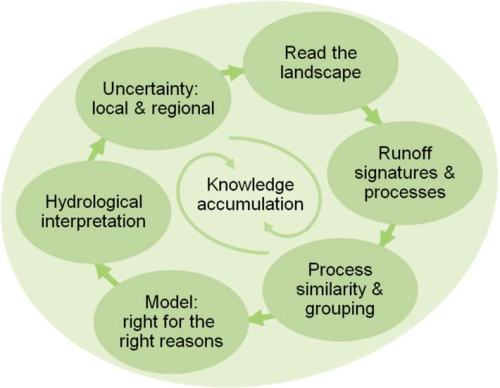 Academic and social bonds between participants and lecturers were jump-started on day-1 during an icebreaker at a “Heuriger” (traditional Austrian wine tavern). The city tour in beautiful Vienna on day-3 further contributed to the strengthening of bonds. One of the greatest challenges of this summer school was the extremely hot weather, as Austria saw one of the hottest summers on record… A collection of photos from this one week experience can be seen in Fig. 4. 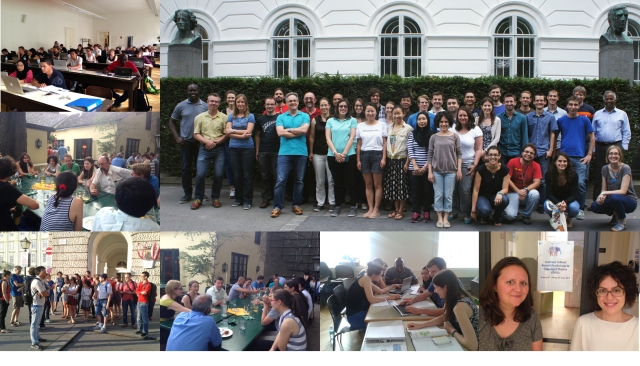 In summary, we learned a lot! The gathering of different people from different backgrounds in the same class made this summer school a unique experience. The PUB Summer School will be repeated twice in 2016, in the US and in Europe. From 6-10 June, it will be held at USGS John Wesley Powell Center for Synthesis and Analysis, Fort Collins, Colorado (contact Stacey Archfield, sarch@usgs.gov), and from 4-8 July it will again be held at Vienna University of Technology, Austria (contact office@waterresources.at, and see http://www.waterresources.at for more information). YHS will update you on further details about the PUB Summer School 2016 on the coming months. We strongly recommend participation to people who wish to:

a. Deepen their understanding of hydrological processes and fit their data into the “bigger picture”

b. Learn about strategies for coping with poor data quality (we know, hydrologists are never satisfied with data availability…)

– While theory is a key component of graduate summer school curricula, the necessity of hands-on exercises and fieldtrips is undeniable.

– We think that availability of summer schools needs to be increased in pursuit of the current hydrology research agenda, e.g., the IAHS Scientific Decade 2013–2022: Change in hydrology and society – “Panta Rhei—Everything Flows” (Montanari et al., 2013).

– YHS will inform you on the upcoming summer schools relevant for hydrologists through the YHS calendar. If you know about a summer school / short course etc. which is not yet listed there, please contact YHS!

– More scholarship opportunities for students from developing countries are necessary for enabling favorable conditions to those who wish to learn about a particular subject which is not covered in the courses offered by their universities. You can follow YHS on social media to hear about the possible scholarship opportunities for attending graduate summer schools related to hydrology.

About the authors
Nilay Dogulu is PhD student at the Middle East Technical University, Ankara (Turkey) and one of the three YHS board members (Secretary), and editor of the YHS -Streams of Thought- featured blog series. Ina Pohle is postdoctoral researcher at the Brandenburg University of Technology Cottbus (Germany) and contributes to various YHS working groups. Correspondence to Nilay Dogulu (ndogulu@metu.edu.tr).

Acknowledgements
We would like to thank the YHS Blog Editors as well as the organizers of the PUB Summer School for their feedback and insightful comments.